Personal Savings Rate Up, Then Down

One of the most remarkable—and under-reported—consequences of the Covid epidemic is how it triggered a temporary spike in the U.S. personal savings rate—that is, the percentage of income that was not spent and could therefore be saved and invested.  If you look at the chart, you see that the savings rate since around 1960 had been gradually declining up until the 2008-2009 Great Recession, at which point we began to see modest increases that still didn’t get above the normal rates between 1960 and 1990.

Then came Covid, and look what happened.  Savings rates jumped upwards above 30%, fell to a little under 15% (which is still higher than historical peaks), and jumped back up over 25% as the next round of the pandemic hit the country.

Since then?  The savings rate today is at or near 5%, which is a few ticks above the historical lows that we saw from 2002 to around September of 2008.   Most advisors would say that a healthy balance sheet would see people save between 10% and 15% of their income, so this rapid decline could be a warning sign that today’s workers will be unprepared for retirement at some point in the future.  It could also mean that a higher number of people will be trapped in high-interest credit card debt if they experience even a modest financial emergency. 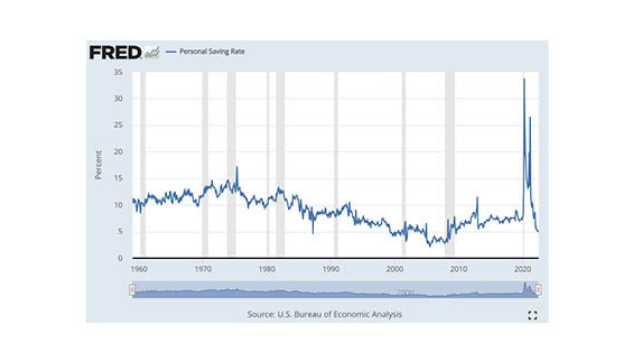